A new habit booming across America has raised much controversy among adults and youths alike: A flash drive-like gadget that contains the equivalent amount of nicotine as an entire pack of cigarettes. This is called a vape, and Juuls are the most popular kind of vape used. The device is similar to cigarettes, and the number of teenagers who use Juuls has quickly overcome the number of teens who smoke cigarettes.

According to recent reports by Safety and Health Magazine, research shows that teen use of these devices is at a record-high and that number is still quickly growing.

The device is illegal for people younger than 18 years of age, yet they’re being advertised with fruity flavors such as fruit punch, grape, and peach, which is especially attractive to younger audiences. Although some teens may feel like it helps them “relax,” this device does more harm than good.

On the 26th of March, Cherokee High School held a Vaping Assembly in response to not only the statistically growing rate of teens using vaping products leading to a detriment to their health, but also in light of some recent incidents of students going so far as to skip classes and hiding in the bathrooms to vape. The bad habit has caused some students to miss important lesson material, abuse their bathroom privileges, and cause damage to bathroom property.

It can be very addictive, rewriting a teen’s priorities, and people who vape are six times more likely to start smoking than non-vapers.  It is also harmful to the body, as it can cause dryness of the mouth and skin; nosebleeds, dry eyes, acne, coughs, and insomnia (mainly a quitting effect). Because the nicotine is in mist form, it is absorbed into the lungs faster. A long-term vaping effect is popcorn lungs, which are open sores formed inside a vaper’s lungs.

Fun fact; vaping can cause diseases such as cancer due to cancer-causing formaldehyde in its system. An E-cigarette can have up to 15 times more formaldehyde than a regular cigarette.

Although vaporizers have been portrayed as safer alternatives for cigarettes, teenagers are using them as modern-day cigarettes. Whether they want to look cool or are being peer-pressured, it is not widely known why teenagers do it. 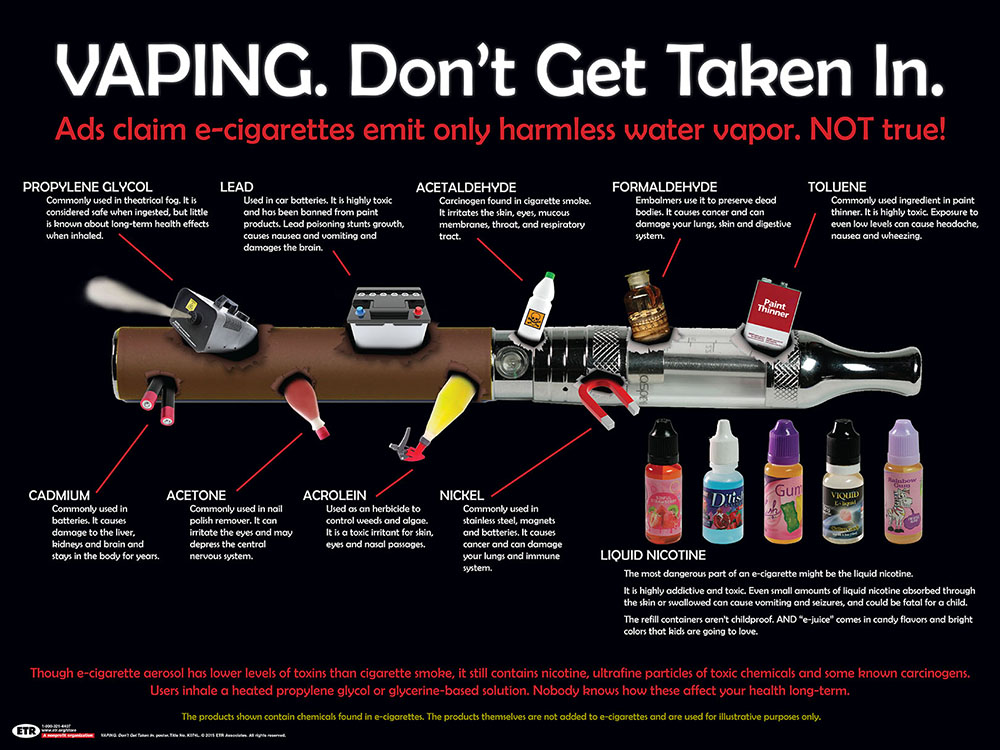 For more information on vaping, visit the sites below;